Previously we showed you the best places in Tenerife to carry out your audio-visual production. In today’s post we present the neighbour island, another one of the Canary Islands which is also full of charming and modern cities and villages where the colonial architecture is the active protagonist. For many people, some spots in the Canary Islands deserve to be a part of any Hollywood movie. In fact, the Canary Islands has been consolidated as one of the favourite places for national and international production companies. Not just for the the tax incentives and the climate, but also for the hundreds of localizations that can be found just a few kilometres apart. Keep on reading our “Filming in Gran Canaria: 4 places with incredible locations”.

At the North of the island, open to the vast ocean, we can find Las Palmas de Gran Canaria, a lively city with an attractive historic centre you can get to know better if you just walk around the streets of Vegueta. There you will find the Cathedral of Santa Ana, the Council Houses, beautiful squares and small chapels and churches.

Leaving behind the cobbled streets of Vegueta and crossing Calvo Sotelo Street you reach some other attractive neighbours of the city such as Triana. This location is known in Spain because the famous Benito Pérez Galdós was born there. Also in Triana there is San Telmo Square with its kiosks or the Cairasco where you can find Madrid Hotel and the Literary Forum. The latest being the place where the first scenes of the movie Allied, starring Brad Pitt and Marion Cotillard, were filmed. 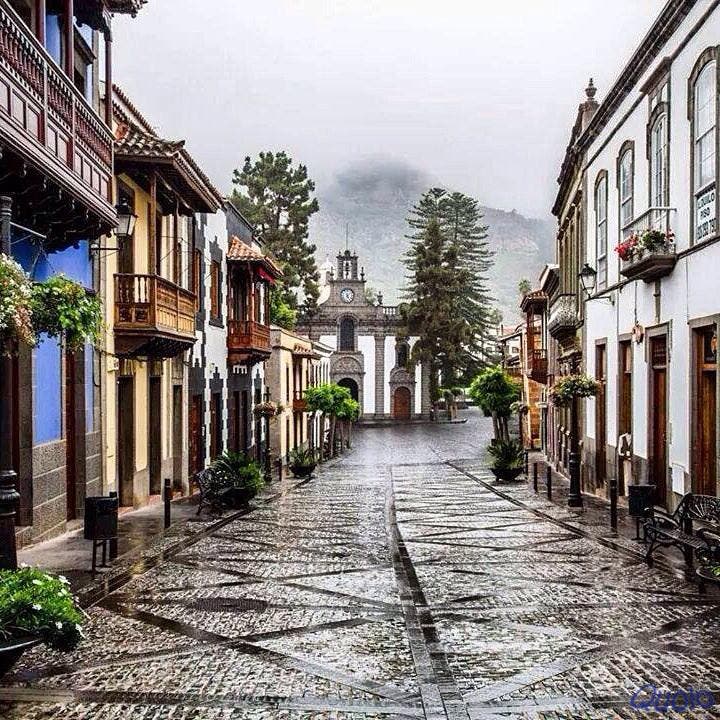 Also in the North of the island, in a privileged enclave for filming in Gran Canaria, is situated one of the oldest locations in Gran Canaria: Teror. The historic centre of Teror is catalogued as Site of Cultural Interest. The colonial style houses with elegant balconies from the Canary Islands garnish many centric housings. The colourful facades and its balconies form a charming image from where you can distinguish the front side of Basilica del Pino.

Behind the church is the Alameda Square. There you can find the old City Council and the Bishop’s Palace. Another charming, small spot in Teror is Teresa de Bolivar Square. There you can see a fountain and a few benches with a colonial touch that could perfectly resemble somewhere in Cartagena de Indias.

Puerto de Mogán is small but with a lot of essence. It has a small beach with a blue flag, a port and a picturesque neighbourhood of white-coloured apartments where the bougainvillea flower climbs the facades. This set of buildings are the most attractive of Mogán as it resembles an Andalusian village which makes this little place one of the places where you can film your audio-visual production. Also, it is well communicated and counts with attractive hotels and a good number of restaurants. 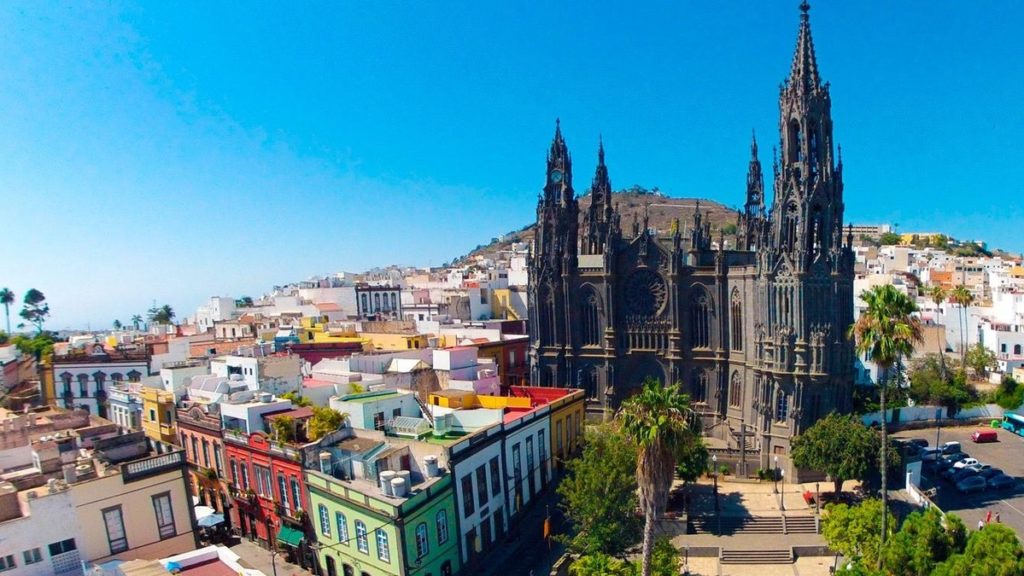 With an urban centre declared of historic and artistic interest, there is no doubt that Arucas is a highlighted place in Gran Canaria. From a distance stands out the dominating profile of Arucas when you spot the Church of San Juan Bautista. Known by many was “the church that wanted to be a cathedral”, it is a unique temple in the Canary Islands. It was build using stones from Arucas and a neo-Gothic style. The best view you can get of the church has to be from Leon y Castillo street and the staircase from which there is a temple.

You can also get a shocking perspective of this church from San Juan Square, which is surrounded by many beautiful facades of traditional Canary Islands architecture. Leaving the square behind and just a few minutes away we reach the Constitution Square, where you can find attractive facades with beautiful doors, painted with intense colours. Some of these buildings hide typical Canary Islands style yards in the inside.

At the Constitution Square you can see the Cultural Centre, the City Hall and the Local Market. All these buildings have an important architectonic value. There is also a square at the entrance of the Local Park. There you find the House of Gourié, a building from the beginning of the XIX century which had been transformed into a Local Museum in Arucas.

Lastly, another place to highlight from this village is the Marquesa Garden. A botanic garden outside Arucas with a free parking lot, very accessible. As a curious fact… Did you know Stephen Hawking visited this place in 2015?

Here ends our tour around some locations in the island of Gran Canaria, although there are still many more to discover in person.

After knowing all this places for filming in Gran Canaria, Would you choose Gran Canaria as a filming destination? If you want to know more about the specific steps you must follow to enjoy all the advantages for audio-visual production companies in the Canary Islands, contact us. We will give you all the information without compromise.